In Creative Mode, the spawner's range of detection can be customized to up to 16 blocks in 5 directions when the spawner is counted as the 1st block in any direction. The number of Fauna that will spawn can be customized to any number between 0 and 999 and can be set to include up to 4 different types of Fauna that have a chance of spawning. This means that the different types of Fauna you select to be able to spawn will not necessarily spawn in an equal ratio to each other. 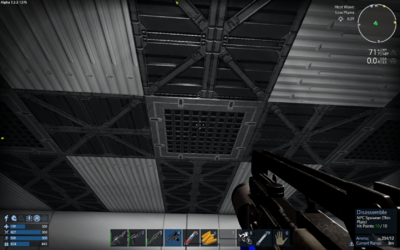 POIs may have these spawner plates marked as invisible. Once you take over the POI with your own core, you might find locations where you cannot place an object and not understand why. These plates cannot be seen visually, but do show up in the POI control panel under Devices as NPC Spawners. Select each NPC Spawner (Thin Plate) and slide the Show on HUD button to ON. Now the locations in the POI will be marked. However to remove these spawners you must use explosive damage in the area - an explosive charge works well. Be sure to remove any delicate objects you do not want destroyed.